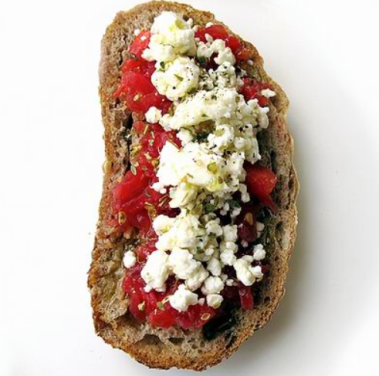 Once apon a time I was Executive chef at the Annabelle and Almyra Hotels in Paphos Cyprus. one chap from Crete working in the Annabelle kitchen used to make the best Damn Dakos I’ve ever tasted! Not only that but I was so impressed with his recipe that I served it to Robby Savage (Famous Premier league footballer) at the Almyra Hotel during his family BBQ.

Dakos is a Cretan snack of bread and tomato that has recently captivated me with its simplicity and its seducing flavors and textures, however before I start my Dakos chitchat I ought to mention one of my favorite food quotes.

Forget about peanuts, these little nibbles if made properly are incredibly addictive, deceivingly simple, healthy and so amazingly tasty. Honestly if you serendipitously stumble across a tray of these little treats and if you attempt to eat just one. I promise you will fail miserably. After the tenth one you will seek out the guy who made them and you will probably beg him to make a few more.

The first trick is the bread. kritiko paximadi is a dry bread rusk from Crete. You could try other breads, but if you want the true experience then I suggest you hunt them down. Other than that you will need an extra virgin olive oil that’s good enough to drink by the pint…just joking, but I think you know what I mean. If you can’t get fresh, ripe, red, sweet tomatoes then just quit while your ahead! (go and buy a Big Mac or something). You will also need some dry oregano (wild if possible), sea salt and black pepper.

Put Bread rusks on a tray and sprinkle with a little cold water and a drizzle of good quality extra virgin olive oil (about 15ml). Cover with cling film and leave for 30 minutes or so to soften. Meanwhile grate the tomatoes. Drain off some of the excess water from the grated tomatoes. Season tomato with sea salt, black pepper, oregano and about 30ml of olive oil. Leave tomato sauce to macerate for an hour or so. Spoon tomato sauce on top of rusks. Crumble feta cheese on top and drizzle remaining olive oil on top (about 15ml). Finaly sprinkle some more dry oregano on top.

Serve as part of a mezze menu or as a snack. Sit out on the balcony or veranda on a hot Mediterranean summer night with good friends. Serve Dakos and crack open a good bottle of ouzo poured into chilled glasses with plenty of ice and a splash of cold mineral water (not sparkling) for gods sake! And just nibble away. Just make sure that the guy who made the Dakos doesn’t get too drunk, as I’m sure you’ll need him to get out of his chair to make some more as the evening cruises along. Otherwise just have a few next time yer “cool by the pool” on a hot day. All things aside you could also enjoy them along with a cold bottle of dry Rose wine. Not the best buddy for beer though, me thinks.